Fashion Week
Zang Toi’s BALLET BABE was presented at Mercedes-Benz Fashion Week on September 10, 2013.   Toi is known in the fashion industry for his theatrical runway shows, so we were definitely excited to see what he would present this season.  The show began with ballerino Cory Stearns dancing down the runway. The first look was a beautiful navy silk dress with black pleated tulle ruffles followed by a similar navy dress with a black ballet leotard underneath. 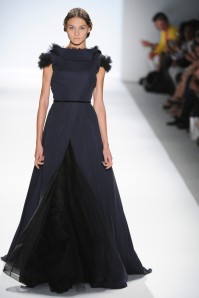 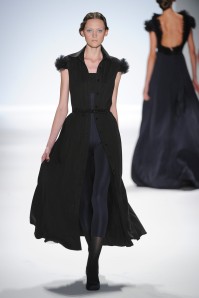 Image stylebistro.com
The ballet theme continued with look number 8 which was a Ratti “ballet scenic backdrop” silk twill tunic with black hand loomed leggings. The romantic gothic castle print was a moody accent to the navy and black designs. One could just imagine the ballet that would accompany the backdrop. The motif was used in a few other designs. 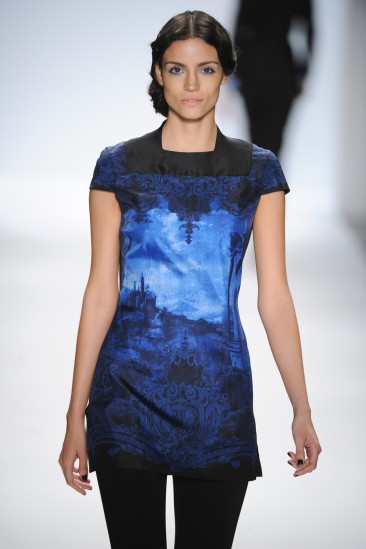 Toi always sends a few women’s suits down the runway. We enjoyed the layering of this one. His use of the sheer blouse underneath to accent the blazer at the wrists was very well done.

Look number 19 slightly missed the mark for us only because of the tailoring. In our opinion, the waist should have been cinched just a bit more. We fear any woman wearing this piece may look wider when wearing it. 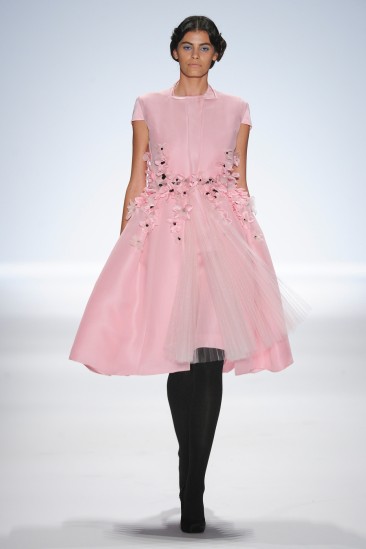 The gowns remained romantic and soft with accents of filigree, sequins, or ruffled tulle. Our favorite gown was the “Sleeping Beauty”. It featured a high-low skirt lined with blue ruffled tulle.  We would have paired it with a black shoe, though. We think the blue gets lost against the blue ruffles. 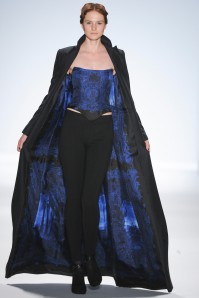 Finally, the finale was Cory wearing a navy silk+wool tail coat with beaded black House of Toi crest as the lining. The tail coat was paired with the line’s black “ballet babe” tights.

To add to the ballet theme, the gift bags that we received included Toi’s nail polish collaboration with ZOYA.  The colors (Ballet Babe, Boy Toi, and Black Swan) were those he used in the runway show.  Click the image to shop the nail polish on ZOYA.

Watch the show via Mercedes-Benz Fashion Week’s Youtube below.
Disclaimer – the music that MBFW chose to accompany this video is a horrible choice! It doesn’t match the vibe that Toi’s original music captured.
We really enjoyed the show.
Special thanks to Zang and VeVe.

Decoding the DNA of Fashion. Bringing you beauty and design inspired by all areas of science & technology.